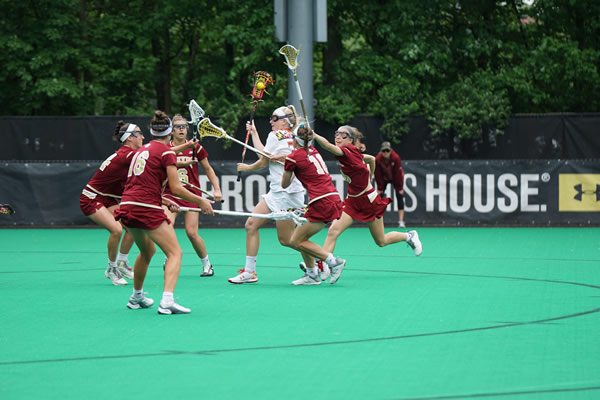 10 FUN FACTS ABOUT LACROSSE you never knew. For example, the tribes used it to distract British soldiers in 1763, perhaps we should bring that one back!

What is Lacrosse?
Lacrosse is a team sport played using a small rubber ball and a long-handled stick.

Fact 1:
Lacrosse is the fastest game to be played on two feet.

Fact 2:
Lacrosse is also one of the fastest growing sport in the United States.

Fact 3:
Native Americans are the ones who invented the game, yet the details about how it was played originally remains a mystery.

Fact 4:
The rules were created in 1794, when a game between the Seneca and Mohawks (tribes) was played.

Fact 5:
The first women’s lacrosse game was played in Scotland, 1890.

Fact 6:
In summer of 1763, lacrosse was played by 2 tribes to distract British soldiers, in order to recapture Fort Michilimackinac (upper Michigan).

Fact 7:
Indian lacrosse was often played with big numbers of players; to the point that it reached from 100 to 1000 players.

Fact 8:
The game was originally used to toughen up young men for war, focusing also on the spiritual side.

Fact 9:
In the 1800’s the French started to play lacrosse which tended to “civilize” the game a bit.

Fact 10:
The French, along with the natives were credited for setting the foundations of the game.

If you play lacrosse, why not pop in the shop to see our full range of Under Armour lacrose sticks available from £59.99 or visit our website